The exchange with Dénia

It was at the beginning of 2001, when, by chance, I met Marifran Bordes, a native of Diane and a resident of the beautiful and old Mediterranean city, of so many evocations of our student days, when we were reviewing the Greek colonies established in Spain.

One of the topics of conversation that we addressed was, precisely, the parties that were held annually in Dénia, which, incidentally, holds the record for the city where the most festive events are held throughout the year.

As I advanced in those topics of conversation, I began to cherish the idea of ​​initiating negotiations in order to try to close an exchange program between our HOGUERAS and the Major Festivities of the city of Alicante and so I transferred it to my friend, explaining that it was part of the campaign that we had started to achieve the declaration of a Festival of National Tourist Interest.

She promised to carry out some steps, near the Dénia City Council, to assess the viability of the matter; For my part, I presented the proposal to the Board of Directors of the Commission, who gave it the green light, which is why I began to draft a draft exchange program, at least as far as its guidelines were concerned.

In a new conversation, I sent Marifran Bordes the draft of the project, so that she could send it to the municipal authorities of Diaz. After a few days, Marifran, informed me that, on the part of the Dénia City Council, there would be no problem in carrying out the exchange program, although it required a formal invitation from the Promoting Commission, as well as the progress of the relationship of activities In which the commission sent from the Alicante town would participate, at the head of which would appear the Queen of its Major Festivals.

At first, the possibility was valued that the Dénia City Council delegation and the representation of its Major Festivities that, with the unique number of “Bous a la mar”, were declared Festivities of National Tourist Interest, visit La Coruña, with reason for the celebration of the central acts of the days of June 23 and 24; However, given the impossibility of accompanying us on those dates, it was decided to invite them to the Coven and Solstice Festivities, acts of Proclamation of the Meiga Mayor and the Meiga Mayor Infantil, respectively, scheduled for June 1 and 2 .

For its part, the proposal of the Dénia City Council, included the invitation to attend the central acts of its Major Festivities, held in honor of the “Precious Blood”, which would take place at the beginning of July.

Once the exchange program was approved by both parties, we began to close the last remaining fringes, waiting for the start of the first phase of its execution, which would bring the Dénia delegation to La Coruña.

We established, as an accommodation hotel for the Dianense delegation, the Tryp María Pita, with which we had very good relations in those years and to complete the program, we made arrangements for the Provincial Delegation to offer our guests a dinner on the night of the 31st. May, in the incomparable setting of the Pazo de Mariñán.

The Dénia delegation arrived in the city on May 31st and was made up of the Major Queen of the 2000 Festivities, Estefanía Martí, accompanied by two of her Ladies of Honor; municipal officials Miguel Angel Ibars, responsible for image of the City Council; the Secretary of the Party Councilor, Ana Sepulveda, and Marifran Bordes herself. For her part, the head of the Party Department excused her presence for personal reasons.

After the dinner offered at the Pazo de Mariñán, the visiting delegation, with its Queen Mayor at the head, attended, on June 1, at the Colón Theater, the XXXI Poetic Coven Party, in which Alejandra López was proclaimed Méndez as XXXII Meiga Mayor of the Bonfires of San Juan, accompanied by his Meigas de Honor.

The following day, Saturday, June 2, the Paraninfo of the “Eusebio da Guarda” Institute was the scene of the celebration of the XIV Poetic Solstice Festival, during which the girl Esther Cobas Penas was proclaimed as the XVIII Major Child Meiga, accompanied of his Meigas de Honor Infantiles.

The exchange program was completed, as far as the phase organized by us is concerned, with a series of visits to certain places in the city, official lunches and dinners and, of course, the traditional exchange of gifts.

The final balance of the presence of the Dénia delegation was highly positive, leaving both parties satisfied with the experience, especially on our part that we continued with our project of making ourselves visible in other parts of Spain.

As I have indicated, as far as the Bonfires Commission is concerned, that program was framed within an ambitious project, started, as we have seen, years ago that would lead us to achieve the title of Festival of National Tourist Interest with which We were finally honored two years later. 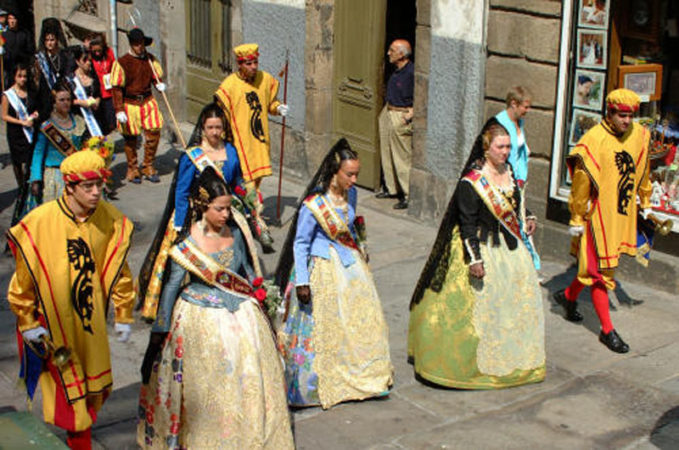 Those HOGUERAS-2001 were, like the previous ones, a success both from the organizational point of view and from the audience and the days passed quickly until the departure date of the Coruña delegation, by air, towards the beautiful city of Alicante.

The representation of the Promoting Commission, according to what was agreed between the parties, was made up of the Meiga Mayor, Alejandra López, and three of her Meigas de Honor; as well as the two Vice Presidents of the Promoting Committee, Mª de la Concepción Astray and Emilio Santos, and myself, as President of the Entity.

I will omit the account of the many anecdotes, some truly incredible, that occurred on that trip, many of them starring the Meiga Mayor and her Meigas de Honor, suffice it to say that we were invited, in addition to the solemn and colorful proclamation of the Queen from the 2001 Major Festivities, to the other central acts of the Festivities, the Precious Blood procession, the “Bous a la mar” day and the rest of the most relevant events of the program.

Special mention should be made of the truly spectacular ceremony of proclamation of the Queen of the Festivities, held outdoors under the starry Mediterranean night sky, surrounded by exquisite taste and elegance.

Receptions in the City Council, official lunches and dinners, Valencian Ball games and even a burnt, with spell included, that the Meiga Mayor offered to the Mayor of Dénia. They were unforgettable days in which we strengthened ties of personal friendship with many of the protagonists of those days.

Once that first experience was over, for reasons that are irrelevant to relate, it was necessary to wait until 2004 for the exchange program to continue.

The figure of the Queen of the Major Festivals had disappeared after the change of municipal government, a consequence of the 2003 elections, being replaced, as a female representative of the City Council, by the Fallera Mayor of Dénia, for this reason it was, precisely, with the Local Fallera Board with which the 2004 exchange was scheduled.

We still had fresh in our memory, the memory of the festivities with which we celebrated the declaration, at the end of June of the previous year, of a Festival of National Tourist Interest, when in mid-March we left, by road, in the direction of Dénia, in a journey that seemed endless.

The days that we participated in those Fallas-2004, passed between official acts, protocol meals, receptions and, of course, attendance at the main days of Fallas Week that concluded with the apotheosis night of the burning in which the different Fallas planted throughout the city.

Nor am I going to refer to a series of events, some quite unpleasant, that occurred throughout those days and that, in no case, were related to our hosts who gave us, at all times, an exquisite treatment.

The return of the visit was verified during the central days of those HOGUERAS-2004 , specifically on June 22, 23, 24 and 25, dates on which the Dénia delegation with its Fallera Mayor , Cristina Ferragut, at the head, accompanied by three of her Falleras de Honor, the President of the Fallera Board and three directors of the aforementioned Entity, participated in the central events of our program, including the Tribute to the Flag where the Meiga Mayor , the Meiga Mayor Infantil and the Fallera Mayor de Dénia, collaborated in the folding of the National Ensign.

The exchange program included, in addition to attending the traditional reception at the Town Hall and the food offered by the municipal government, participation in the Cavalcade of San Juan and the other acts of A Noite da Queima.

However, the persistent rain that fell that night in San Juan, prevented the departure of the Cavalcade and, therefore, the falleras saw their participation in that act frustrated. In spite of everything, by joining the different groups that paraded through the streets of Coruña those days, they allowed thousands of Coruña people to enjoy themselves with the contemplation of the showy Fallera costumes that rivaled the regional ones, dressed by our Meigas.

Once the exchange was concluded, the balance was equally positive and the foundations were laid to continue it in the next edition.

I remember that, in February 2005, the Promoting Commission received the invitation to attend the proclamation of the Fallera Mayor de Dénía 2005, attended as representative by the First Vice President, Mª de la Concepción Astray.

The following month, March, the delegation of the Promoting Commission left, by air, heading to the city of Alicante to attend the central acts of those 2005 Fallas.

The Coruña delegation was headed by the Meiga Mayor 2005, Laura Rey González, accompanied by three of her Meigas de Honor; the Vice President of the Promoting Commission and President of the Association of Meigas, Mª de la Concepción Astray, and a Member of the Board of Directors of the Commission.

As happened the previous year, the Meiga Mayor and the rest of the delegation participated in the most outstanding acts of the fallero program that year.

The return of the visit took place on June 22, the date on which the Dianense delegation arrived in La Coruña, led by the Fallera Mayor 2005, Cristina Morera, three of her Falleras de Honor, the President of the Fallera Board and three of its Vocals, as well as the Dianense musicologist Josep Juli Sendra Piera, who, in addition to accompanying Meigas and Falleras in the San Juan groups, playing the dulzaina, a traditional Valencian instrument, offered a documented conference entitled “the music of the people” that We are framed within the Cycle “Coruñesas Pages”.

During their stay in La Coruña, the Falleras and their companions participated in the Tribute to the Coruña Woman, on the 22nd day; the offerings and the lighting of the Fire of San Juan, in the morning of the 23; the traditional City Hall reception, held that same morning; all the acts of A Noite da Queima, including the Cavalcade of San Juan, occupying one of the floats, and the Fallera Mayor participating, together with the Meiga Mayor and the Meiga Mayor Infantil, in the lighting of the Bonfire-2005.

On the 24th, the feast of San Juan, after attending a lunch offered by the City Council at the Casa de los Peces, the Dénia delegation attended the Offering to San Juan, held in the Third Order, an act with which the official participation concluded of our guests in the HOGUERAS-2005 program.

With the end of those HOGUERAS , the exchange programs with Dénia also concluded. Different motivations, some of an economic nature, and others caused by various causes, including some misunderstandings, made it advisable to terminate that project that served, while it was in force, for our San Juan and our Meigas to be present in one of the Regions from Spain who knows the most about organizing parties.