The Hail to Our Lady of the Rosary

It was in 1991 when it began to be held, each morning of June 23, this act considered 1st category within the organizational schemes of the Promoting Committee of the Bonfires of San Juan.

It is about worshiping, on the morning of one of the central days of the program of the HOGUERAS, the Patron Saint of La Coruña

, attacking the favors received and begged to intercede for us so that the day of June 23 is free of any setback and can be celebrated with healthy joy.

La Salve, which is prayed every morning on the eve of San Juan at twelve-thirty in the convent church of Santo Domingo, where worship is given to Our Lady of the Rosary, patron saint of the City, is preceded by the Comitiva de las Meigas who, coming from the church of the Third Order, go to the Dominican temple to present their offering to the Virgin of the Rosary.

It is a simple but very emotional act that begins at the doors of the temple where the Meigas are greeted by Father Prior of the PP. Dominicans, holders of the convent. Once the Meigas occupy their corresponding places in the Chapel of the patron saint of Coruña and after the salutation of the officiating priest an offering of flowers is made in which participate the Meiga de Honor, Meigas de Honor Infantiles and the Lady of San Juan.

At its conclusion, the Children’s Meiga Mayor deposits a bouquet of flowers at the foot of the image of the Virgin, giving a reading to her personal offering on behalf of her Children’s Honor Grids and all the girls in the city.

Then, with the same ceremonial, the Meiga Mayor read to his representing all the youth of A Coruña. The act concludes with the recitation of a Salve initiated by the officiant and with the blessing to all the assistants.

Because it is a religious act and in accordance with the rules of etiquette in force in the Promoting Commission, the Meigas mayores attend with Spanish Mantilla, sporting, in addition to their accrediting Bands, the distinctive Medals of their positions, while the Meigas infantiles they make with the regional Costume of Galicia, dressed with cap, mantilla or bobiné.

During these years the different texts written and read by the two major Meigas have been loaded with content, showing in them the devotion they profess in the image of Our Lady; in many cases they have enjoyed a high literary value, which shows the importance they attach to this intimate prayer of the Salve.

In the first years there was the participation of a choir in charge of chanting the Salve cappella, however, over the years, it was considered appropriate to suppress this participation motivated by the disorder that involved a mass moving Coral, in the morning of a working day, to the Santo Domingo temple to perform a performance of a few minutes.

At the conclusion of this act, traditionally the Meigas and his entourage went to the Municipal Palace in whose Hall of Sessions were officially received by the city. This happened over forty-five years, unless on June 23 it fell on a Saturday or Sunday, however, this tradition was interrupted in 2015 when the mayor of the tide refused to receive the Meigas.

At present, this act has been assumed in programming by the Meigas Association, which organizes it following the guidelines described. 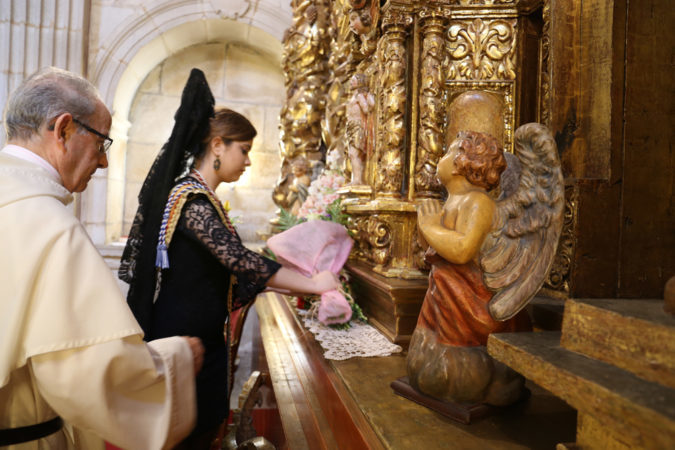