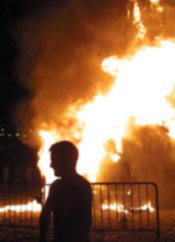 Any night is good to arrive at La Coruña. The popular song says that it is better to enter La Coruña at night than in the very sky of day. And every time the night takes over the city, casting its shadows on squares and evocative nooks, it seems as if the soul Corunna, that intimate space of experiences and memories, was released and showed all its splendor in the eyes of Own and strangers.

But if any night is good to get to Marineda, Noche de San Juan, the most important festive milestone of the entire annual cycle , is undoubtedly a magical moment, incomparable, unparalleled with any other night of the year.

The fiery cult in the solsticial night is lived, always, with intensity in the city. Streets and squares rival, with the perspective of time as a guarantee, to get the best and highest bonfire of those who burn in that night loaded with poetic meaning. From Los Castros to Monte Alto; From Palavea to Agra del Orzán, passing by Eiris or Mallos, in any corner of any neighborhood, a bonfire rises or just a sardine communal with which to celebrate the shortest night of the year that opens the door, wide , To the newly released summer. What really matters is to gather around the fire to celebrate it and render it ancestral worship.

The month of San Juan is different in La Coruña. In mid-May, each year, the activities that make up the HOGUERAS program begin ; A conglomeration of cultural, social, sports and popular events that reach their peak with the celebration of "Noite da Queima", on the night of June 23. The Feast of the Poetic Aquelarre, in which the figure of the Greater Mega or the Feast of Poetic Solstice is exalted, in which the same is done with the Child Major, serve as a prologue, in unequaled frames, more than a month Loaded with activities that will have as an epilogue the traditional Tribute to the Flag.

The Week of San Juan, previous to the Night of the 23, is a different time able to evoke almost forgotten prints; So it is still easy to see, in the evening, in any neighborhood, a group of young people running from one side to another carrying a large trunk, possibly stolen from a work under construction, which they will then hide surrounded by the greatest secret and finally Will serve as the central axis of the bonfire they will plant in the square or at the crossroads of streets closest to their place of residence.

A singular fact is constituted every June 20, the punctual placement of the Bonfire of San Juan in the arenal of Riazor. A great allegorical Bonfire around which satirizan experiences of which the city witnessed during the last year, turned all this into monument of cardboard stone that will be sacrificed in the night of the 23 to the 24.

With the passage of the day the details are finalized to celebrate the Night of San Juan. In the different Societies, bars in the neighborhoods or simply the clubs of friends or neighbors prepare the sardine to be held in the afternoon of June 23. Others, the youngest, have the great pyre that will burn before the sound of twelve o'clock on the night of San Juan.

The morning of June 23 dawns, in La Coruña, different from the rest of the days. Little by little the keys to the whole festive framework begin to be discovered. At midmorning, the Meiga Mayor, the Meiga Mayor Infantil and their respective Meigas de Honor parade, in a colorful procession, forming an evocative stamp from another era, through the main streets of the city to the old part to light the magical fire of San Juan and intoning a Salve at the feet of Our Lady of the Rosary, Patroness of the city.

Another print, linked to that morning, is offered by women who return from the market carrying a curious bouquet of wild flowers . Artemis, bieiteiro, berger, fiuncho, ferns, Santa Maria grass, malvarrosa, marshmallow, oregano, trovisco, verbena, wild roses, among others, are the species that make up such a singular bouquet that will serve, once macerated in water, Dew of the Night of San Juan and after making the corresponding ablutions to wake up on the 24th, to preserve from any evil, both body and soul. Finally, the bouquet will be left to dry, hanging in the air, so that, throughout the year, it will serve to frighten us from the home to witches and other evil beings.

In the afternoon, the city dresses up as a party and again the bands and folk groups take over streets and squares, warming the atmosphere for the night that is already looming.

The sunset begins to flood with the peculiar smell of grilled sardine . At the door of any bar or any community of neighbors, a grill is prepared to roast such delicious fish of this month of the year. "For San Xoán a sardine molla or bread," says the popular saying in clear allusion to this seafood delicacy is its best moment of food.

The night goes, little by little, falling on the city and with the first shadows a flood of young people begin their pilgrimage towards the beaches of Riazor and Orzán carrying old boxes and timbers. As if out of nowhere, in the wide sand formed by the two beaches, at the foot of the great bonfire, small pyres of wood and cardboard are formed, ready to be burned.

When the eleven o'clock at night, from the Third Order, in the middle of the Old City, the San Juan Fire Commander crosses the great Atlantic balcony, relaying the fire with which the great Bonfire will be lit. Then begins to parade the cavalcade that runs along the Paseo Marítimo, transporting the Meigas, accompanied by a musical jolt, to the area of ​​the Paseo where the great Bonfire is located . Thousands of Coruñese invade the Paseo Marítimo, in its stretch between the beaches of Riazor and Orzán.

There is little left for twelve o'clock, the magic hour for antonomasia. The small bonfires of the beach begin to light one by one; Soon the two great sands will form a kind of fiery rosary that will reflect its flames in the calm waters of the corunian cove. It will be then that the whole city, turned to its sea, entone a kind of symphony in greater fire. 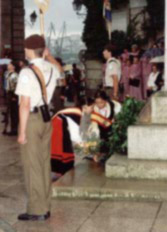 It will not be difficult, at that moment, to see more than one fulfill the purifying rite of the bath of the nine waves in the calm waters of Riazor, another of the traditional elements in this simpar celebration.

Twelve o'clock. Thousands of people crammed the beach of Riazor. The fire of the dozens of small bonfires is projected, illuminating the solstice night, giving it a magical, almost ghostly appearance. A carcass of fireworks fired from the Rotunda, they dress in multicolored gala the sky of the newly released summer Corunna.

The great moment has arrived. The Meiga Mayor and the Baby Junior Major set fire to the Bonfire which, in a few minutes, is a pasture of the purifying flames. The annual rite of the cult of fire has been fulfilled.

From here, the party is lived in the street with the great verbena of San Juan ; On the beach where the younger ones continue until dawn, perhaps in order to see "dance the sun" or simply to give full account of other rites, related to fertility, proper to this Night; The many pubs and cafés on the Paseo Marítimo and the surrounding area become an obligatory meeting point for those who wish to prolong the party or any forest or fraga around the city, where they go in search of the precious arcano called " Water "or, perhaps, with the pretense of discovering the fountain or cave, in which a beautiful" Moor "jealously guarded his great treasure and which can only be seen on a night like this.

Meanwhile, in the calm waters of Riazor and Orzán, mermaids, nereids and newts, sing their magical symphony of fire and water.

Another night has erupted, the Night of San Juan Coruña, the popular festival par excellence. The dream of a nigth of summer.