Night of the burning

The culmination of the program of HOGUERAS is reached in the days of 23 and 24 June that constitute the great days of the party . 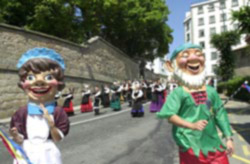 Since the beginning of the activities of the Meigas that run through the main streets of the city , reminding people that just woke up a holiday and it is time to acquire the traditional bouquet of herbs of San Juan that, once Macerated to the dew of the magic night par excellence, will serve to make the corresponding ablutions on the morning of the day of the Saint; This branch of aromatic herbs - digital or sanxoans; The fiuncho; The male fern; The bieiteiro; The mauve; The ameneiro; The sagebrush; The herba of Our Lady, etc. - is offered by the Meiga Mayor and by the Baby Gentleman to the first Authorities of the city who receive them in their official offices. Afterwards, all the Meigas go to the monument to King Alfonso IX, who in 1208 granted to the city the Charter Puebla, at the foot of the millenary Tower of Hercules - World Heritage - to make an offering.

At midmorning, the entourage is formed headed by the Greater Meiga and the Greater Child Junior. They, accompanied by their Meigas de Honor, brackets, pages, heralds and soldiers, will travel through the center of La Coruña, in order to attend the church of the Third Order to attend the blessing and At the foot of the image of San Juan, of the fire with which at night the Meigas will light the great fire , also taking advantage of that moment to bless the timbers that, coming from all parts of the world, will burn in that kind of Universal Bonfire . The morning concludes with the offering made at the feet of the Virgin of the Rosary, Patroness of the city.

In the afternoon, the party moves to the Paseo Marítimo on the way to Riazor beach; There, music bands, charangas, bugle bands and drums and bagpipes, warm the atmosphere while, little by little, thousands of small bonfires are getting ready on the beaches of Riazor and Orzán.

With the first shadows of the night, when the soft Atlantic breeze permeates the city with a delicious aroma of roasted sardines that are toasted on hundreds of grills placed in any street or plaza, the party acquires a nature card in the incomparable frame of the Paseo Marítimo, in that unequaled arch that forms the bay of Orzán with the beaches of Riazor, Orzán and Berberana as a magical backdrop.

Little by little, around the great allegorical bonfire, planted in the preceding days, hundreds of small bonfires are forming, anxiously awaiting the arrival of the night to fulfill its fiery rite. With them, thousands of people are beginning to crowd both the beaches and the Paseo Marítimo on a night when the warmth of summer is already being felt, inviting the street celebration of the party or receiving the traditional bath of nine waves in the Waters of the Atlantic. 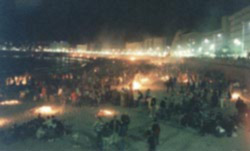 To the point, the Night da Queima begins, first with the Verbena of San Juan and later with the discourse of the showy entourage that escorted by several dozen motorcycles, accompany the torch in which the sacralized San Juan Fire is transferred ; Afterwards, the Cavalcade slowly and majestically walks the Paseo Marítimo, accompanying the Meigas; The groups and bands participating throughout the day walk with her that large balcony that overlooks the city to the sea at the foot of the millenarian Tower of Hercules.

It's twelve o'clock. It's already St. John's Day. A Noite da Queima has reached its zenith. Hundreds of bonfires illuminate the beaches leaving their flames reflected in the calm waters of the cove, giving it a magical, almost ghostly appearance; The Corunna sky is illuminated with a multicolored waterfall. The Meiga Mayor and the Baby Junior Major compliment the old rite, making the great universal fire burn on all four sides. Then, the party continues throughout the city until the dawn of the longest day of the year, having its continuation throughout the day.

In the afternoon of the day of San Juan, the multicolored procession accompanying the Meigas to form the annual floral offering to the Saint in the VOT of San Francisco, in the heart of the Old City, Colorful procession of San Juan that crosses the main aries of Coruñesas, putting an end to the central days of the program of HOGUERAS.